This national scale web map displays the distribution and areal extent of soil attributes such as drainage, kind of material and classification of soils in terms of Soil Order and Great Group. The relief and associated slopes of the Canadian landscape are depicted on the local surface form thematic map.The information is mainly derived from the 1:1M scale Soil Landscape of Canada database (SLC version 2.2 and 3.1).

The Soil Orders of Canada map displays the general distribution of soil orders across Canada. The soil order is the highest level (broadest grouping) within the Canadian System of Soil Classification (Soil Classification Working Group 1998). Soils classified at the order level reflect the climate and landscape characteristics associated with the different regions of Canada. The Soil Orders map was created by totalling the areal extent of the various soil orders in each SLC polygon and displaying the dominant value. Proportions of other soil orders present in each SLC polygon are also accessible via the pop-up windows.

Individual Soil Order maps are also provided for each soil order in the Canadian soil classification (10). Individual Order Maps displays the occurrence and distribution of the dominant Great group of a given soil order where this order is dominant in the SLC polygon. Details by great groups are not shown for Solonetzic, Regosolic and Gleysolic soils. 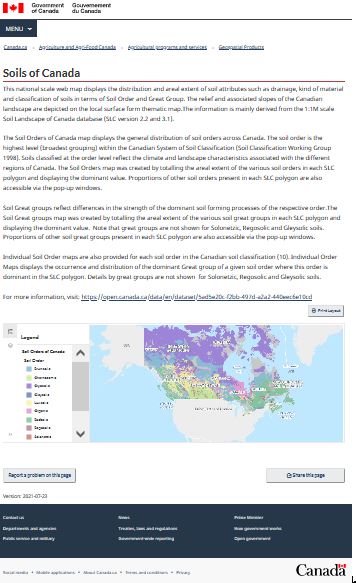 Hello, I'm a researcher working in Hydrological Modeling fields with scientific purposes. You can check for the last publication, in collaboration with McGill University through prof. Jan Adamowski. We really appreciate your contribution to the science development. Best, Abdiel