With the closing of CODE 2015 at 6 p.m. last night, we now have the chance to reflect on this year’s competition. We had great aspirations for this appathon, but what we saw over the weekend was spectacular. “Exceeded our expectations” would be an understatement.

In the end, over 1,300 participants from across Canada took part. It’s clear that CODE participants raised the bar for 2015, as some participants opened apps yesterday for testing. The top 15 apps will be announced on March 6. At that point, it will be your job to vote for the Fan Favourite app.

CODE 2015 was truly a national appathon. The Government of Canada supported VIP and Partner Hubs all over the country, and we wanted to share our experiences from some of those centres.

The Toronto Hub hit the ground running. As soon as the themes were announced, the teams got straight to work brainstorming ideas and searching Canada’s Open Data portal for dataset inspiration. A few folks who arrived on their own spent some time scouting for team members before diving in. We had a full house, complete with experienced hackathoners, including some participants from last year’s CODE. Come day 2—after a restless night’s sleep on couches, desks and keypads—the room was filled with bleary-eyed coders who had settled on their ideas and were hard at work coding. Walking around the room you could see the wheels turning and feel the level of confidence the teams have in their apps—participants will have some tough competition from this room. Good Luck Toronto! 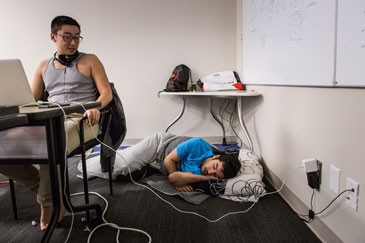 The story in Vancouver was undoubtedly about collaboration. A handful of teams set up in small breakout offices, and barely left. Others had distant partners—one team was regularly bouncing ideas off their teammates while crowded around a speakerphone, and another kept a constant video feed to a team member traveling in Korea. Most, however, had everyone together at the BC Technology Industry Association Innovation Hub overlooking the Vancouver skyline. The Hub was alive with a collaborative flow of ideas, research, experimentation, obstacles, and the overcoming of those obstacles. There will definitely be a strong Vancouver presence among the top apps—the Vancouver CODE participants are bright, keen, and inspiring to see in action. And, it’s great to see that almost half are women.

Shortly after CODE 2015 started on Friday evening, inquiries began coming into the expert centre in Ottawa. The team of Government of Canada data experts fielded questions ranging from what the definition of youth was, to how to use vectors and coordinates, to how much it costs to raise a child in Canada. When the answer was not obvious, a virtual conversation took place among the more than 40 experts across the country to come up with an answer quickly. This interaction between data users and those responsible for the data not only helped CODE participants get on with the work of creating their applications, but provided valuable insight on how to improve the findability and usability of open data in Canada. 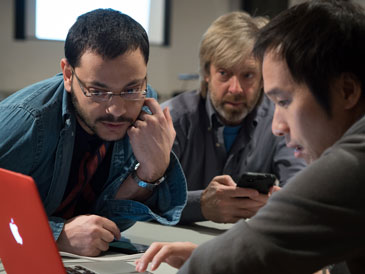 The mood in Montréal was electric, all creativity and energy. Notman House proved to be an ideal venue, and in particular, a great meeting place for programming and design. That’s the theme here: attention to the end users’ needs seemed to be the preoccupation for everyone.  User experience designers were involved everywhere, helping teams achieve a level of maturity in their app development. Montréal coders will have some polished apps in the Top 15.

Across Canada, CODE 2015 was full of these stories of creativity and innovation. As stated by Minister Tony Clement, President of the Treasury Board and open data champion:

“I was impressed by the wealth of creative talent displayed by this year’s participants. My high expectations for CODE 2015 were exceeded. The significant value that can be added through the re-purposing of our Government of Canada data is truly remarkable. I look forward to meeting the winners of our 2015 CODE national appathon when they are announced next month.”

For news on the CODE 2015 Top 15 and Winners, and so you don’t miss future open data events and developments in Canada, you can register for email updates.

And, we would love to hear from you. Were you a CODE 2015 participant, sponsor, or mentor? How was your Canadian Open Data Experience?

Data visualisation: How the National Energy Board succeeded to make its data more accessible
END_OF_DOCUMENT_TOKEN_TO_BE_REPLACED