The Journey to Canada's Action Plan on Open Government 2014-16

In total, over 1,400 individuals took part and collectively generated 2,010 ideas, comments, and questions. Civil society organizations also submitted detailed submissions that were invaluable during the development of the Action Plan.

The input received from Canadians throughout the consultation process was instrumental not only in the development of the specific commitments made in the final draft of the Action Plan, but also in providing more focus to the policy discussions that led to these commitments. In a very real sense, Canada’s Action Plan on Open Government 2014-16 is the result of a pan-Canadian collaborative effort. 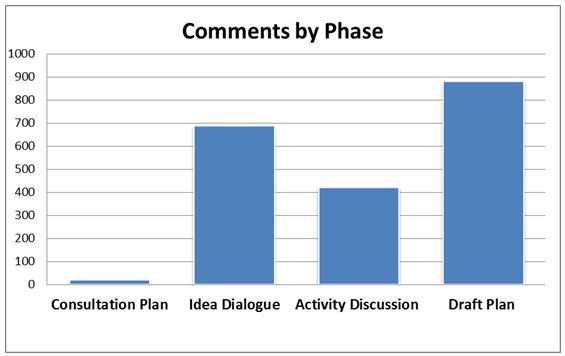 Chart is based on 2,010 comments, ideas and questions received from all sources between April 24 and October 20, 2014.

Consultations on the Action Plan were held in three phases, including work with Canada’s open government community on the design of a robust consultation framework, the identification of ideas for open government activities, and the refining of those ideas into the eventual Action Plan commitments.

At every phase of the consultations, ideas and suggestions were grouped and discussed by the team putting together the draft action plan. The discussions were guided by Considerations for the Open Government Action Plan 2.0 Consultation, and led to significant changes in the language and content of the plan as it evolved. Not every idea made it into the plan, but every idea was considered. Ideas that did not make it into the plan will not be forgotten. They are captured in the “What We Heard” report, and will provide a foundation upon which to build when it comes time to prepare the next Action Plan on Open Government.

The twelve commitments directly reflect many of the comments received. Specific examples include:

We will continue to consult with the public, civil society, and other levels of government as we implement the second Action Plan on Open Government. Work is also underway to further improve the consultation process itself.

Of course, as with any work on open government, we are always looking for new ideas, either to enhance current work or to be included in future plans. We look forward to continued engagement with Canadians as we work toward even greater openness and transparency.

Details on the process and archived conversations can be found on Canada’s Action Plan on Open Government consultation page.

Other related blog posts include the Idea Dialogue Summary and Towards Canada’s Action Plan on Open Government 2.0.

Data visualisation: How the National Energy Board succeeded to make its data more accessible
END_OF_DOCUMENT_TOKEN_TO_BE_REPLACED