The goal of the consultation on the implementation of Canada's Action Plan on Open Government was to engage the Canadian public and seek their feedback on the Government of Canada (GC)'s progress in meeting the year-one commitment deliverables of the Action Plan.

Canada's Action Plan on Open Government – Year-1 Performance consultation was posted on data.gc.ca. Visitors were able to view the consultation materials and comments received, and also show their support for these comments by clicking on a thumbs-up button. To post comments, participants were required to create and login to an account on data.gc.ca.

Participants were also given the option to submit their feedback by e-mail via the Open Government mailbox (open-ouvert@tbs.gc.ca).

Participants were asked to provide their feedback in response to the following three key questions:

Context for these three questions was provided via a link to the year-1 commitments under the Action Plan on Open Government and the relevant Key Year-1 Progress Highlights.

Over the four-week consultation period, over 2,800 people visited the consultation site. The number of comments submitted during the consultation was low, with a combined total of 50 online postings and e-mails. However, the comments garnered over 500 thumbs-ups.

The feedback received covered a wide range of topics and helped inform Canada's Self-Assessment Report on the implementation of the Action Plan on Open Government's year-1 commitments. 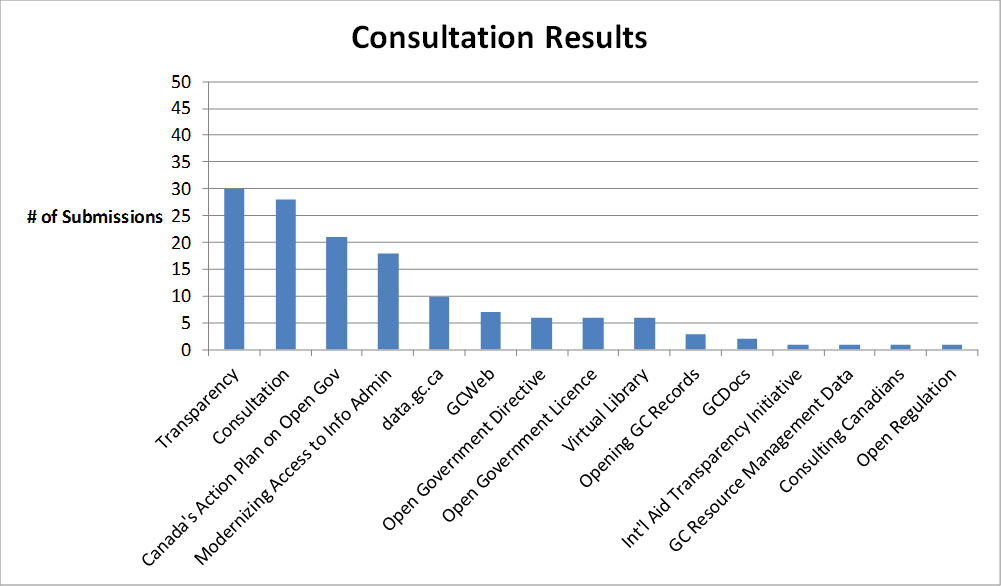 More than half of the respondents questioned the federal government's commitment to transparency. Many examples were submitted to highlight this topic, including the cancellation of the long-form census and the methodology employed for Canada's Action Plan on Open Government – Year-1 Performance consultation.

"I think information is still hidden and difficult to access and that many things that are available are still a challenge to search for… be more transparent."

More than half of the participants commented on the actual consultation activity itself. Most focused on a perceived lack of transparency of the process. Respondents felt the consultation had high barriers to entry because they believed that it was not (well) publicized, too short in duration, poorly timed, and/or respondents had difficulty navigating the consultation and submitting comments.

"My primary comment on this consultation is that it has not been promulgated in an effective manner. It seems almost hidden…"

Comments were mixed with respect to progress made in year 1 of the Action Plan. Some respondents felt that good progress was made, while others gave Canada a failing grade.

"Good progress has been made on the Action Plan."

"I would say that the Government of Canada has failed in meeting any year-1 commitments."

Half of these comments were criticisms about the Action Plan itself. In general respondents felt it was too vague and too focused on technology and Open Data. They would like to see a revised Action Plan that is more ambitious, has concrete commitments, and does a better job of incorporating consultation activities within its development process.

A few respondents stated that the pilot project allowing ATI requests and payments electronically is a good start in making government more efficient. However, the majority (15) provided commentary beyond the scope of the Modernizing ATI Administration commitment in the Action Plan on Open Government and called for updating and reforming the Access to Information Act.

Included in the criticisms noted by respondents is that the Government of Canada has not heeded the input by Canadians and the Privacy Commissioner urging it to update and reform the Access to Information Act in order to improve the quality of the ATI responses. Respondents also noted their perception that there is less ATI information available than previously, that access to information is restricted, and that the turnaround time is slow, despite existing service standards.

Feedback was provided for all of the commitments. Those receiving at least 5 comments (10%) are explored below.

In general respondents were pleased with the existence of data.gc.ca. However, a number of suggestions were made for site improvements including the need to have more accurate data descriptions and clearer navigation.

"… the organization which published the open access data, simply hosted it on a site which contained a .csv file with no accompanying data dictionary or attempt to explain what field contained what pieces of information. This was a major oversight, as it renders the data virtually useless, despite the government's best intentions to make it open access."

Another comment highlighted that the deliverables under this commitment are not clearly outlined; therefore it is difficult to assess progress made.

Respondents are seeking more clarity around the plans for GCWeb. They would like to understand how having one consolidated Government of Canada site will work, including details on adopting a user-centric model. They would also like to ensure that a Web archiving plan is developed prior to the implementation of this commitment.

The anticipated release of the Open Government Directive is regarded positively for the effect it is expected to have on increasing the release of GC datasets. There is also an interest in conducting public consultations on the Directive.

"We look forward to the Open Government Directive and its implementation. We hope that the public will have a chance to provide input on this issue."

The Open Government Licence received positive feedback. Respondents hope to see its reach extended beyond data.gc.ca and to have it adopted by the whole of the federal government, as well as provincial and municipal counterparts.

"We especially applaud the new Open Government Licence and hope it will become mandatory for all Government of Canada publications."

Respondents agree that the Virtual Library commitment is a good idea. They would like to see the plan behind it and have the opportunity to provide input. They hope that the site will ensure access to both new and old publications and information.

Results of the consultation were used to inform the Self-Assessment Report on the implementation of Canada's Action Plan on Open Government year-one commitments.