The Government of Canada aims to publish data in an open format and provide people with easy and reliable access to data, all while reducing barriers to entry, promoting innovation and eliminating unnecessary costs for businesses using the data.

Data is presented in different formats. This document contains information, tips and suggestions on how to use some of the formats presented in the Open Data Portal as well as how to work with some of the application programming interfaces (APIs). For general information on working with open data, please visit our Open Data 101 page.

Structured data is usually in the form of text but follows a specific format giving it machine readability. Some more complex formats may be in binary format such as maps and GIS related files. You will find many different formats in the Open Data Portal. This section covers some of the popular formats and provides some tips on how to work with them.

One important detail is to pay attention to Character Encoding which can affect how the data, mainly the text is parsed during the import. This will be more noticeable when dealing with languages such as French which contain extended characters.

OpenOffice provides easy selection of the character encoding to be used. Figure 1 and Figure 2 illustrate an example where the downloaded CSV dataset file was encoded using a different format than the default UTF–8 for OpenOffice (illustration using NeoOffice). 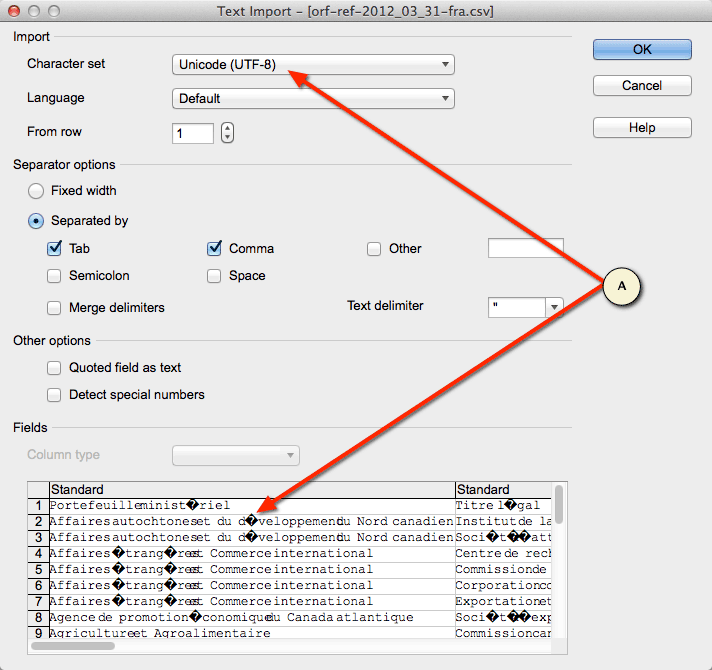 The character encoding can be manually selected using the data import wizard. The first step is to start with a new Excel workbook. Go to the Data tab and click on From Text which will launch the import wizard (Figure 6).

The first step in the wizard is to select the appropriate encoding. In this example, we are selecting the UTF-8 encoding which is located near the bottom of the list. Once selected, you can preview the character decoding in the data preview pane of the wizard.

The next step (Figure 7) allows you to specify the proper delimiter(s) used in the data file. Once again, the Data preview pane allows you to preview your data and see if it is parsing the data correctly. 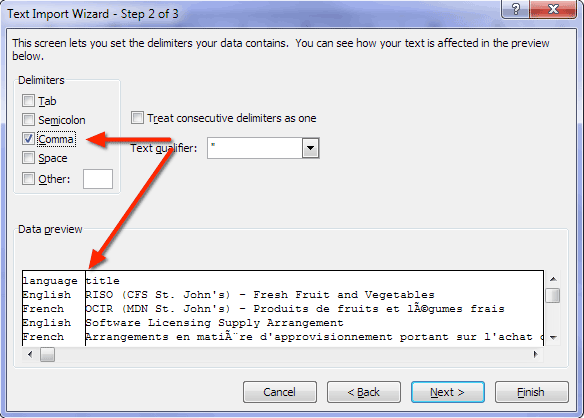 Optionally, you can specify the data types for each of the columns (Figure 8). In most cases, simply clicking Finish will suffice. 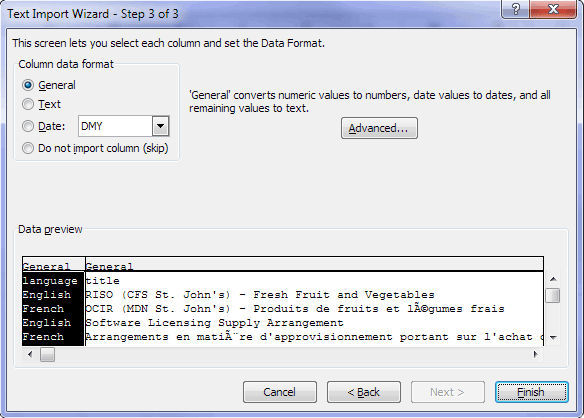 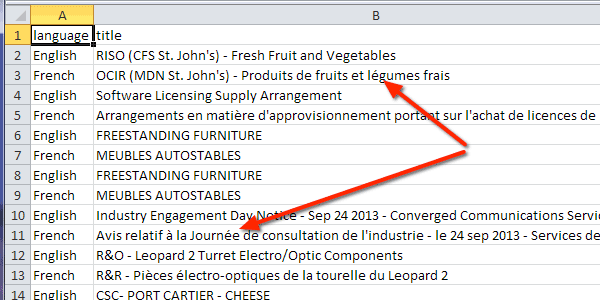 You may discover an interesting special byte at the beginning of a file. This byte is called the Byte Order Mark or BOM. This marker is used to signal the size of the character encoding used in the UTF encoded file. For example, UTF–16 will render as U+FEFF (Figure 5) or þÿ in a text editor capable of displaying this value. In general, you do not need to concern yourself with the BOM as it is used by the application you are using. However, it can be a useful byte to help you select the correct file encoding during an import if you are having issues. 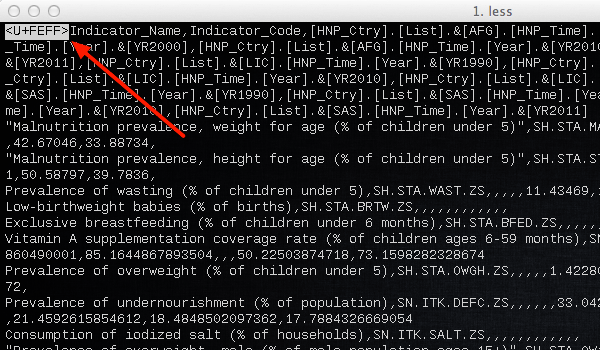 Figure 10: A Byte Order Mark in a data file

JavaScript Object Notation (JSON) is a structured open data format that is lightweight and very well suited for mobile applications. It is used either natively or as a library available in most web and mobile development languages. Detailed information on JSON can be found on the official JSON web site. Here is a simple example of JSON data:

We have lots of great examples of working with JSON data and RESTful APIs in various programing languages.

XML (eXtensible Markup Language) defines a set of rules for encoding documents in machine-readable form. It is defined in the XML 1.0 Specification.

GeoTIFF files are similar to standard graphical TIFF files; they are viewable using a regular image viewer that supports the TIFF format. However, GeoTIFF files contain extra metadata related to the geographical nature of the image. Refer to the official sites on GeoTIFF for additional information on the format:

Here we are using the Homebrew package manager on OSX to install the GeoTIFF library and use a utility to read a GeoTIFF:

Once the GeoTIFF library is installed, you should be able to compile a simple C program to read the metadata:

ESRI Shapefiles (SHP) are popular geospatial vector data files which are accompanied by a series of files necessary to use the SHP file. As listed on Wikipedia, the following is usually packaged into a compressed ZIP file:

There is a great write-up by Ben Balter on converting Shapefiles to GeoJSON using gdal’s ogr2ogr utility as follows:

What is an API?

An Application Programming Interface (API) is a broad term. In the context of Government of Canada’s Data Portal, it refers to internet connected software interfaces that provide access to open data. In most cases, these interfaces will use the HTTP protocol. APIs provide on-demand access to large, timely or complex data allowing developers to mash data from multiple sources and create new views on information through applications or visualizations.

For more information on how to work with or build an API please see the following videos:

The Government of Canada is working on releasing APIs that will:

You can access the data.gc.ca dataset registry through our API.

Connecting to an API

In general, APIs are intended for developer use. This section will cover examples using various tools and programming languages. Consider searching the Open Data Portal for datasets if you do not have any programming experience.

cURL is a command-line tool used to transfer data from or to a server over various TCP/IP protocols. In this case, we will review how to use cURL to request data from an HTTP RESTful API. cURL can be installed on Windows, OSX or Linux distributions.

Once installed, cURL should be accessible from a command-line prompt by simply typing curl. Typing curl will not yield anything useful other than confirm ou have it installed. At a minimum, you need to specify the destination URL.

You may also need to provide some parameters including HTTP headers to successfully query an API. In our example, the API recognizes the Accept and Accept-Language headers.

By default, cURL will output the response from the destination onto the console screen (STDOUT). The above example redirects the output to a file named data-raw.json which will contain the English dataset in JSON format. 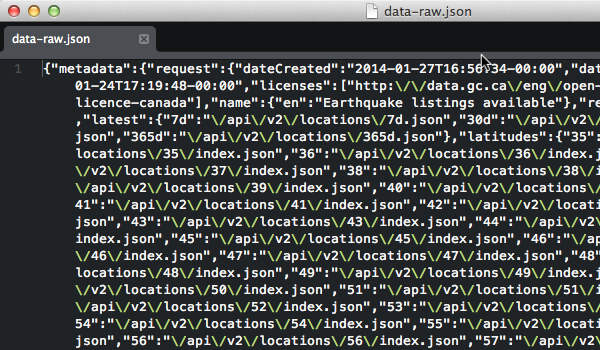 In most cases, the response will be optimized (minified) to reduce the data transfer size (Figure 6). You can use another command-line tool such as jsonpp to format the data into a human-readable output (Figure 7). 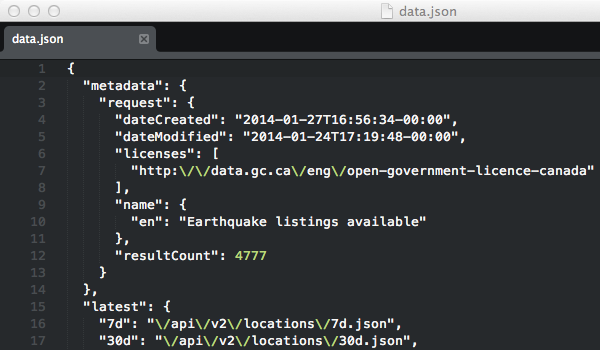 The majority of browsers have plugins available which are tools to interact with RESTful APIs. These tools allow you to set parameters, headers, fetch a response and visualize the data. These can be very useful tools to quickly explore API data. Search your browser’s plugin repository to see what plugins are available for you.

Most modern programming languages have the capabilities of accessing network-based resources such as HTTP-based services either natively or through libraries. We will cover some simple examples of how to get started using some common languages used for web and mobile development to access a RESTful API.

The sample programs below will each demonstrate how to query an API and parse the JSON response. The response is parsed to display the name of the result set and iterate over one of the result groups.

In Python, two libraries are required; the json and requests libraries which are used in the example below:

JavaScript executed within a browser is bound by security restrictions around connecting to 3rd party web sites. By default, remote queries are denied by browsers as it is considered a Cross-Site Scripting (XSS). Remote queries are permitted if the API response contains an appropriate Access-Control-Allow-Origin HTTP header allowing foreign queries. The following example connects to an API using the jQuery library.

There are several 3rd party libraries for Java SE which allow you to easily work with JSON data. For this example, we are using the JSON.org library which is also available via Maven.

Caching is a broad topic and can be seen at the memory, storage or communication layers by either side of a client/server. In this context, the server side is the data source and the client side is the developer or user who is trying to download the data.

Some data sources may use caching to help deal with scalability. As previously mentioned, this caching may be found at different levels within their service. This is typically transparent to end users but it is important to understand these practices to efficiently and respectfully interact with the data source.

If your requests continuously yield the same response yet you are expecting an updated/newer dataset then consider the following:

In some cases, the data source might be using a Content Delivery Network (CDN) to cache common responses. Look at the HTTP headers to see hints of a CDN or other caching mechanisms being used.

You may find optimization opportunities within your application to cache data in part or in its entirety. Caching can dramatically increase the performance of your application and deliver significant improvements to user experiences. Of course, caching on the client-side requires a balance between performance and accuracy as client-side caches can become outdated.